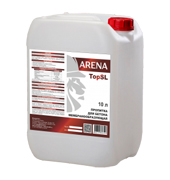 Liquid impregnation of ARENA TopSL, otovy to application, is intended for processing of newly-laid concrete. The caused structure provides creation on the surface of concrete of a thin and strong film (membrane) interfering allocation and evaporation of moisture than creates favorable conditions for a set of durability of concrete. Specialized membranoobrazuyushchy impregnation for ARENA TopSL concrete is solution of synthetic acrylic resins in water, and contains a complex of the modifying polymeric additives.

After processing by structure of ARENA TopSL and full completion of reactions of hydration, products purchase the best strength and operational characteristics, on their surface vysola and other consequences of interaction with the mineralized atmospheric moisture are not formed. Concrete becomes stronger and resistant to attrition, in this regard, at the movement on the made sex of people and the equipment dust is practically not formed. Membranoobrazuyushchy impregnation can be applied to processing of concrete both in buildings, and on open spaces.

Seal the surface of wet fresh concrete by forming a thin, wear- resistant membrane that effectively protects from loss of moisture to complete the process of hydration of concrete.

Preparation of the basis

The basis for drawing membranoobrazuyushchy impregnation for concrete has to be net. <h2APPLICATION It is applied to fresh concrete after about 12 hours, after laying, concrete with a freshly reinforced concrete-ARENA BiTop immediately after the last mechanical ment. Work should be carried out at a temperature not lower than + 5 ° С. Membrane-forming impregnation for concrete is applied with a velor roller or sprayer for mortar mixtures evenly over the entire surface in a single layer.

It is supplied in ready to use.

CARE OF THE TREATED SURFACE

Usage of the processed surface is recommended not earlier than 14 days after processing of concrete. For maintenance, it is recommended to use a conventional wet cleaning.

Guarantees of the producer

The manufacturer guarantees compliance of mix to requirements of specifications at observance by the consumer of storage precautions and indications of this instruction. A warranty period of container storage of the manufacturer – 12 months from the date of production on condition of undisturbed tightness of an original packing.
© 2018 ARENA Waterproofing Manufacturing Plant LLC. All Rights Reserved
Legal Terms Privacy Policy
Оставить заявку на обратный звонок